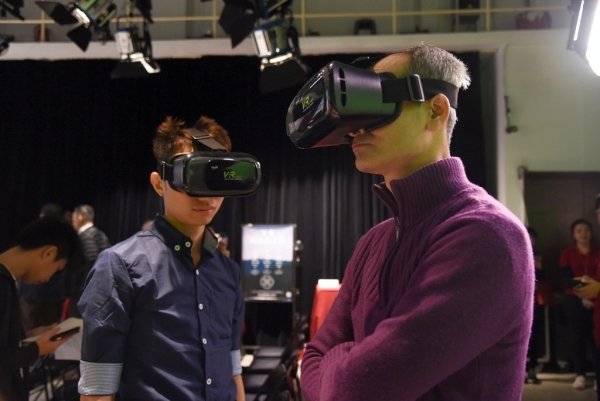 The students from Master Programs of College of Journalism and Communication at Shih Hsin University launch the first university’s VR horror short film “Midnight” on the press conference on 22nd day. The professional technologies and the story are appreciated by the site guests Vice Manager of HTC’s VR New Technology Department, Yung-che Pao and the Hyper Immersion Technology’s Marketing Supervisor Fu-jen Hsiao, and they highly praised creativity and practical power of Shih Hsin’s students.

“Midnight” was supervised by the Professor of Department of Radio, TV & Film, Lung-zin Chi, and directed by Cheng-hsueh Yang, the student from the Department of Radio, TV & Film. The film depicts a series of bizarre stories that the protagonist encountered at the editing room on her birthday. The production team is interdisciplinary, consisting of PhD of Communications and Masters of Speech Communications and Digital Multimedia Arts, and furthermore the VR leading corporations HTC, Hyper Immersion Technology and Funique VR Studio guide and provide the internship opportunities and the students produce the excellent VR works.

Lung-zin Chi pointed out that VR is a novel technology, mostly based on games and experiences, and is seldom used to capture drama films. The VR short film “Midnight” is captured at 360° field of view. The difficulty lies in the lack of directing and workers, and there are only actors and cameras, but the Shih Hsin’s students overcome the challenge and create the outstanding works, and we also hope students can make more and more progress. The director Cheng-hsueh Yang said he is very interested when Shih Hsin develops VR curriculum. After one year of learning and practice, we produced professional finished product through cooperation with various fields. He laughed and said he is very grateful to Shih Hsin, the teachers, and the leading companies because they provide valuable learning opportunities for us.