A First Ever in the Taipei Grand Hotel! Providing a Stage for SHU Students 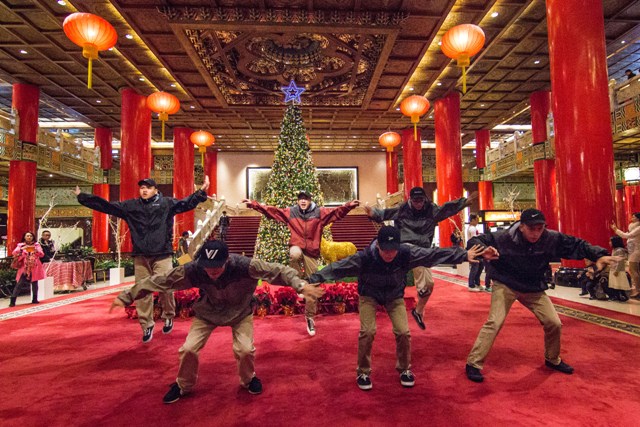 SHU cooperated with the Taipei Grand Hotel to promote the Future University Project of the Ministry of Education in 2017. For the first time ever, the Grand Hotel’s lobby was turned into a stage, providing SHU students a chance to demonstrate their talents. The show was held on New Year’s Eve 2016. Different SHU clubs delivered applause-winning shows throughout the night. The event also provided SHU interns an opportunity to practice what they learned in school.

The first performance of the night was by the musical group, Fong Sheng Gu Yao, which gathers together aboriginal SHU students and nonstudents. They caught all the attentions with their aboriginal folk songs. Then a street dancing group, Eat Fresh, gave a performance that showed the vitality of youth. Later, the interns of the SHU Media department filmed and reported every moment.

The head of the Public Affairs Office, Mr. Yi-Zgang Ye, says that the report “Future University Project of the Ministry of Education” mentioned an expectation that schools would broaden students’ learning environment. Originally, SHU and Taipei Grand Hotel only had the cooperation of two Department of Tourism students working in the hotel as interns. “However, because of SHU’s 60th anniversary, the chairman of SHU and CEO of Taipei Grand Hotel, Mr. Jhang, had a chance to talk face-to-face.” They successfully outlined the initial concept for the production. The project alsoprovided a stage for students multiple multiple talents beyond strict academics.

The Taipei Grand Hotel’s CEO, Syue-Shun Jhang, an SHU graduate, was more than happy to see SHU studentsperform. Mr. Jhang had a Cultural and Creative Hall set up, and opened the lobby for artists and talented students to do shows and exhibitions. SHU’s cheerleading team, a cappella group, and aboriginal clubare well-known in Taiwan.Hopefully they added a little joy to the festivities held in this most famous Taiwanese hotel.