We Are a Family: A Welcome to the Spring’s International and Overseas Students 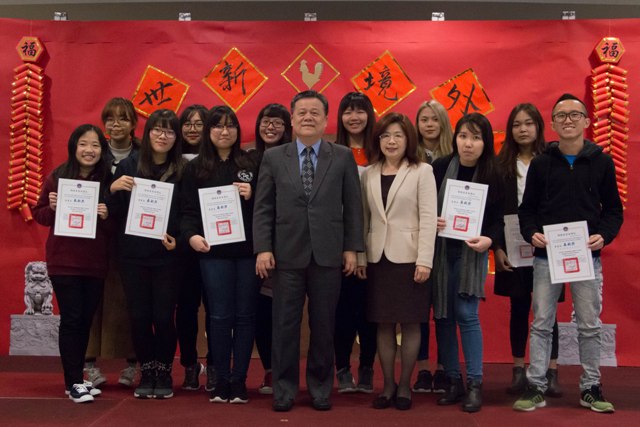 Shih Hsin University held its International and Overseas Student Spring Gathering on March 1st to help students far from home overcome homesickness. Over 200 international students joined this event. Besides copious amounts of food, there were also some applause-winning student performances. In the end, students received red envelopes as a blessing, though Chinese New Year had already passed. The gathering highlighted the bustling atmosphere of the new semester.

The president of SHU, Dr. Yeong-Chyan Wu said that studying overseas is not an easy thing. Just like the saying goes, “He that travels far knows much.” Dr. Wu also encouraged students to spread out and learn from each culture to broaden their horizons. “Learning from different regions can make your vision much wider.” Dr. Wu said.

The shows performed by students were more impressive than ever. The hosts cosplayed the roles of Emperor and Empress. Some students dressed as the God of Fortune for a comical skit, the crowd of professors and students were more than delighted. The head of the Overseas Compatriot Student Counseling of Overseas Community Affairs Council, ROC, Cyong-Jhih Jhuang said that the students of SHU are always the most creative and outgoing. Ms. Jhuang was thankful SHU students had the opportunity to show themselves. She also encouraged students to grab the chance to develop their potential.

Shug-Rong and Jang-Jin, students of the Department of Radio, Television and Film, were given the award for Honorable Behavior and Knowledge. Jang-Jin said that it is not difficult to win the award as long as students do their duty in academics, anyone could win the honor. Other than that, he also mentioned that the atmosphere in SHU is free and open, everyone can express themselves through their skills.