Special Topic: All the Way to Taiwan, C-Gua Boy from SHU Achieving Dreams 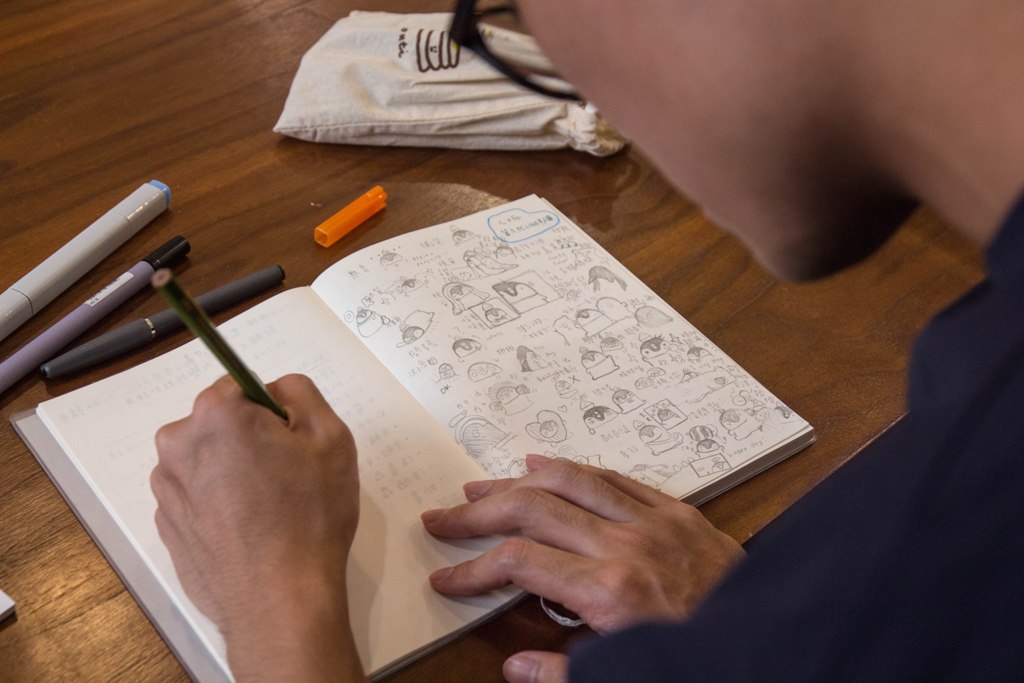 “Hi, nice to meet you, I am C-Gua!” A watermelon-loving Emperor penguin with blushing cheeks and a cute little mouth is the well-loved illustrated figure popular on the internet. C-Gua in Chinese sounds similar to watermelon, the name matches the image of this cute little penguin. A post a day on one of the most popular social media sites, Instagram, gained him almost 12 thousand followers. The creator behind this penguin is Kai-Wun Wang, who is currently a student of the Department of Graphic Communication and Digital Publishing in SHU. Wang is a Malaysian boy with thick rimmed glasses and when he laughs, his eyes nearly disappear with mirth. His goal is to have his own brand in the cultural and creative industry.

Walking on the trail to success with a practical personality.

Talking about the initiative to set up a studio in Taiwan, Wang says that the cultural and creative industry in Malaysia is not as developed as in Taiwan. It is very rare to see a small scale studio or brand with only a few people. Thus, he is very grateful for the environment and resources he has in Taiwan. Wang hopes to stay in Taiwan and contribute to its prosperity after graduation. Unlike others, Wang does not feel helpless about graduating. He has plans to go into publishing industry doing illustration jobs. Meanwhile, he is increasing his production and learning to manage a brand. He has decided to achieve his goal of setting up a personal studio through a step-by-step plan.

“Publishing books is what I want to do the most now!” Whilst planning for the future, Wang continues to work hard in the present to reach his goals. He loves to read, which urged him to publish his first graphic book when he was 19 years old. The book documented his backpacking experiences in Thailand. He has published two graphic books now. Wang says that he always carries notebooks and colored pens when he travels in order to draw interesting things. Because his inspirations come from those little things in life. Wang also emphasizes the importance of continuity, which is the reason he posts pictures of his drawing every day on his fan page. This not only keeps the creative energy going, but also keeps the readers involved.

From Malaysia to Taiwan: Walking out of the comfort zone

Wang says that the period when he first came to Taiwan was very difficult because he had no friends or family around him. He thus devoted himself to drawing and writing to solve his homesickness by putting a smile on other’s faces with his creations. Fortunately, the feeling of homesick was soon washed away by doing what he loves. Wang started to put himself into more school activities, which filled his school life with new friends and events. Wang says that joining the International and Overseas Student Club was his most memorable time in SHU because he made a lot of friends and became the director of artistic design.

Creation is the projection of one’s inner self and circumstances

“People often tell me that I look like C-Gua!” Wang laughs. He thus gave himself this nickname and says that he and C-Gua integrated into one long ago. Any creator knows their characters are a projection of themselves and their circumstances. C-Gua is also a projection of Wang’s personality. Wang explains that he came up with the character of C-Gua when he was looking for some ideas for an illustration competition. The idea of combining his two favorite things, watermelons and penguins, then popped up in his head. C-Gua likes being alone but is never bored, loves traveling and spacing out, just like Wang. “Although it sounds a bit conflicting, I guess it’s alright!” In fact, that is the reason why C-Gua is so unique and loved by people, the character is full of conflicts and yet is colorful and adorable. Wang says that one time when he was selling his merchandise in a creative and culture market, a fan he had never met before gifted him a handmade clay figure of C-Gua. Wang was very touched and he put the gift on his desk as motivation.

The power of emotions and persistence.

Except for posting work on the Internet, Wang also produces a series of merchandise, including cushions, postcards, washi tape (colored masking tape with designs), badges, and even LINE stickers. Wang says that each product he designs is according to his everyday life experience and needs. Thus, the lovable designs and practical functions are well-loved by the public. Vice-chairman of SHU, Cheng-Hu Jhou says that the culture and creative industry is an rising industry, and it is the trend everywhere. It is also one of the focuses for SHU students to master in their future development.

Needless to say, managing an independent brand is very difficult for a foreign university student. Wang says that he has to do it all by himself from designing to publishing products. How to balance the income is also another difficulty. His number one fan is his mother in Malaysia, who always pre-orders the products. The support and feedback from his fans are the encouragement he needs to keep going.

Wang also made a lot of friends in the industry on the road to his dream. One of them is Wang’s university mate, Mr. Pulp, who always gives Wang suggestions before he publish his products. Learning from each other and improving together motivates Wang to be better, and he does not feel lonely anymore. After the tribulations and accomplishments of his college phase, Wang is now more certain of his goal to be a creator. He hopes to bring his art back to Malaysia and to be seen by the world.